An emerging artist based in Accra, Hamid Nii Nortey has stood witness to the city’s considerable transformation in recent decades – one that has materialized in its expansion and architectural development and in the social dynamics that have emanated from it. Looking to the inhabitants of the city as reflections of these changes, Cross Hatching Affluence is a visual snapshot onto the growing middle- and upper-class elite that has come to represent an increasing share of Accra, as well as Ghana and the broader African continent’s population. A testament to the extensive socioeconomic and industrial development of post-Independence Ghana, the paintings move away from prevailing tropes of war, poverty and disease as they often relate to the continent. Shifting from the less fortunate to the flourishing middle class, Nortey reclaims ownership over this visual narrative, thereby leading the way for new voices and narratives from the continent to emerge.

At once mimicking and interpreting the rich fabric of Accra’s cityscape, Nortey’s paintings depict sweeping urban scenes of expansive buildings and interior scenes. Fascinated by the spatial structures, Nortey indulges viewers into experiencing physical space on a flat surface – rendering exterior and interior architecture as a pivotal structural element to his work. Adopting an architectural lens, he investigates the peculiar language of composition through lines. With a complex interplay of linear contrast and harmony, and with parallel lines converging in a vanishing point, Nortey builds on perspective as a crucial element in bringing the works to life and emulating the city’s bustling urban life. Mirroring the works’ many compositional lines, Nortey’s hatching technique – consisting of closely spaced parallel and crossed lines which he uses to add texture and dimension – echoes his desire to communicate the beating heart of the city: this time, by breathing life into his characters. Reflective of his pursuit for realism in detail, Nortey seeks inspiration from Dutch post-Impressionist painter Vincent van Gogh. Creating a visual link with the latter’s rough brushstroke treatment, best embodied in his notable Starry Night (1889), Nortey covers the skin of his figures with his characteristic drawing and painting crosshatching technique. Contrasting the artist’s broad and smooth Impressionist color palette, from sienna brown to burnt sienna, the close-knit parallel lines, varying in spacing and width, create a rough, loose organic texture, conveying the at once visual and tactile qualities of natural skin. Meticulous and playful sketches, his portraits grow into lifelike, and lively, visual impressions.

Weaving his figures into his dazzling urban landscapes, Nortey invites his viewers to step into the lush narratives of the glamorous and successful – to, as quite literally depicted in Build an Empire, Leave a Legacy (2021), climb onto a Victorian staircase or go for a ride in a classic vintage car. In shedding a light onto the physical landscape and material markers of Ghana’s evolving society, they become the basis for the artist’s visual storytelling, at the border between the physical, the real, and the story and broader narrative, the fictional. Beyond their referential and decorative role, the complex cityscapes come to embody the artist’s conscious approach to image-making. Offering a new display of the “spectacle of Black wealth” as Nortey states – a cross-hatching of Ghanaian and African affluence – his paintings restructure prevailing visual narratives of the continent, hereby reclaiming ownership over them and affirming a sense of both pride and hope.

About Hamid Nii Nortey: Hamid Nii Nortey (b. 1987) is a Ghanaian artist whose compelling and colorful figurative portraits delve into Ghana and the African continent’s fast-evolving social landscape – shedding a light onto its diverse generations and social classes. Inspired by Dutch post-Impressionist painter Vincent van Gogh, Nortey’s works are characterized by the signature cross-hatching technique which he applies onto the skins of his figures. In contrast with the smooth flesh tones rendered by his subtle and wide-ranging color palette, from sienna brown to burnt sienna, his parallel lines, varying in spacing and width and across multiple areas, allude to natural skin tones, all-the-while bringing life to his characters and urban sceneries. 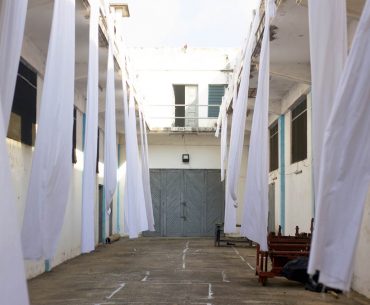 Noldor announces extensive expansion plans, as the residency grows to include additional warehouse spaces to further engage and support contemporary artists from Africa and its diaspora. 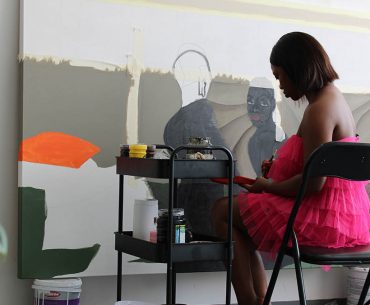 ADA \ contemporary art gallery, specialized in the work of emerging artists across Africa and its diaspora, unveils Enter Paradise, an exhibition of new paintings by South African emerging female artist.