I first joined Facebook in 2008. I started to realise that as a girl or a woman, certain images are somehow expected from you, or at least, I started creating this expectation for myself, as any other girl that wants to be seen as a woman, and wants to be seen as any other girl or woman. All girls were reproducing what they’ve seen on television, the Internet, pop stars, MTV stars and movies.

Years later I learned that there was a specific word to describe this power present in these visual relations established between the one who poses and the “unknown/anonymous” spectator. I wondered while looking at so many images of girlfriends that if it was through an attempt to look good and feel good that they would post pictures in specific positions and focusing on specific parts of their bodies. I wonder if by sexualizing themselves, would they be aiming for a cis heterosexual-male viewer appreciation, needed somehow in order to feel beautiful. Years later this question persisted and motivated me to start an investigation around the limits between these two processes; Empowerment or Self-objectification.

Laura Mulvey in her famous 1975 text Visual Pleasure and Narrative Cinema uses psychoanalysis to discover how cinema operates through mechanisms of fascination reinforced by pre-existing patterns at work within the subject and the social formations that have shaped it. It is interesting to notice that In Mulvey’s psychoanalytic analysis, it is recognised that the first articulation of the „I“ subjectivity is composed by an imaginary, recognition or misrecognition and identification with an image, what the author calls „the ego libido“. From this identification with one’s own image, the ego and narcissism are born and cinema also uses this procedure as a strategy. “Scoptophilia“ removes the spectator from the object looked at. The construction of the ego through the image seen demands identification between the spectators thus connecting the need for recognition of their fellow human being on the screen. Both of these dichotomous processes were crucial for Freud in his understanding of formative structures and desires. This text, written in the 1970’s, expressed the empowerment from many women about this reality, or perception of it, and it was the decade of insurgency for many artists and collectives who used art as a way to defend their feminist ideals. Hannah Wilke, Carolee Schneemann, Marina Abramovic and Valie Export are examples of this generation of artists who used the body itself and its exposure in performances and photographs as a denouncement. In those years, North American and European feminist movements put their women’s bodies on display as a strategy of combat. Contrary to the stereotypes of feminists as „masculine, ugly and unwanted“, these women used their bodies to revidicate their right to own one’s body. (OLIVEIRA apud RAGO, 2001).

It is crazy to realise that fifty years have passed already and what started in the 70’s through performance and photography has now gained virtual space as it’s field of action. Besides many victories achieved by the different feminist movements around the globe, the changes from what these women from the 70’s claimed for, doesn’t seem to be fully, or not even close to being conquered. Perhaps that is why women from today (we, women) might have adapted their language into a more sarcastic tone, full of derision and disbelief.

Are there any limits between empowerment and self-objectification? Which of both processes is taking place in images produced by women (we, women) who want to be seen strong and empowered, but for that they adopt certain positions and elements following what has been named as the male gaze? Which brings us to the work of Nusser Glazova, a duo by Julia Nusser (b.1991 in Hassfurt, DE) and Tereza Glazova (b.1996 in Riga, LV), two artists based in Zürich who recently graduated at the Zürcher Hochschule der Künste. The artistic duo uses irony, social media, sarcasm and girly elements to laugh at us, as a public and spectators of society. They make use of various mediums for each of their pieces, combining scenographic installation, sculptures, performance, photography, painting and more, always with a strong influence from pop culture. They are literally looking back to the male gaze and speaking its language. “Just like the other girls” – the bio on their instagram account expresses what I started wondering in the beginning of this text. But time flies and I do believe that significant changes have taken place in female awareness about the male-gaze. I do believe that women have gradually empowered themselves within their bodies and ways to express themselves. Maybe Nusser Glaznova talks to others, of how we, women, have understood the processes between looking and being-looked-at-ness that Mulvey described.

I spoke to the artists to know more about their experience performing in Zürich where they have been part of various exhibitions. They shared a big difference in the impact that they are capable of producing when working together. During the interview the artists commented on their interest in reaching people not only from the art scene and how also they have been able to transform the atmosphere of the openings in which they are invited to participate. They discussed how different reactions their work produces on people, how they have been accepted by some and rejected by older generations of feminist artists of the city, who see their work as a step backwards within the process of women’s empowerment. Therefore, they are satisfied with the fact of not trying to draw a clear line that indicates the limits between being ironic and simply performing the roles that have been projected on them throughout their childhood and teenage years. I could definitely relate to their experience on embracing the-to-look-feminine changes that come within ageing. We shared the experience of how in the first moments of puberty we would want to be seen feminine and attractive and after a couple of years, by conceiving the different meanings and responses to it, how we started to reject any element that will associate us with a feminine “girly girl”. Furthermore, just after recognising how much this feeling of negligence to want to be associated with the standard of women that is also directly connected to a misogynist mindset is when one allows oneself to wear makeup and high heels once again.

In the opening of the exhibition at Kunsthalle Zürich the duo showed up dressed in traditional slavik tiaras and colorful dresses and make up. The outfit of the artists generated an entire collective performance in which the artists admit to have performed as the hostess’s of the exhibition. Once again, the gender role of the women who inevitably feels responsible for making everyone feel welcome to the exhibition, and once again, it confirms the effect of how women dress in a space and its effect on people. For this exhibition they participated with a video and a performance. In the video, both artists are looking directly at the viewer, while sharing motivational messages, charged with hope and referencing a popular part of contemporary culture. The nature of these messages, which are quite common these days, fills their listeners with motivation to move forward, a desire to improve them and other life philosophies seemingly related to psychology. In truth, however, there is never any evidence of the legitimacy behind these discourses. Self-help messages are actually, very often, a sabotage of the self. For those seeking such support, the false consistency or lack of legitimacy can easily lead anyone to question their lack of competence in simply not being able to follow such advice. In recognising one’s own worth, surpassing oneself, not comparing oneself to others in an extremely competitive society, which bombards everyone through social media with images of standardised bodies, smiling mouths, well-accompanied people and uninhibited ostentation. This is a contradiction that traps everyone, just like the other girls within society. Whoever encounters the work of Nusser Glazova, can easily recall moments or anxieties relevant and pertaining to the performativity of gender and its respective roles in society. If theory, intellectuality, hard work, persistent struggle have not been able to change our gaze, not even the gaze of those who embrace the feminist struggle, i.e. the struggle for equality as a conscious daily practice, Nusser Glazova makes us aware of it.

On the 3rd of July, is the opening of a solo show of the duo at Longtang Gallery in Zürich. For the occasion the artists will present a series of collages and sculptures. In the collages, we see photos of both artists in positions and with elements that refer to typical teenage photos of a generation that will now be between 20 and 35 years old. “The first pictures I took were pictures of myself and of my friends for social media, which means that I have more than 10 years of experience of taking these kinds of pictures” – Tereza. Indeed, the practice of photographing oneself or friends for posts on facebook or instagram is a meaningful part of contemporary culture, a way of expression and a performativity of gender. It is in fact one of the first actions through which an entire generation started to reflect on their own image, on how to present oneself socially and it has been the first generation to do so largely virtually due to the technology use expected of them. In the collage work we will see many elements that will instill a reflection of the 90s. They are the kind of actions implemented to attempt to look cool and look sexy when you are still in school and even when there is nothing sexy or luxurious around you. But you gather the sneakers, the black-milk leggings, the Lita Shoes and you try to look sexy and happy in front of the camera. Just like the other girls. 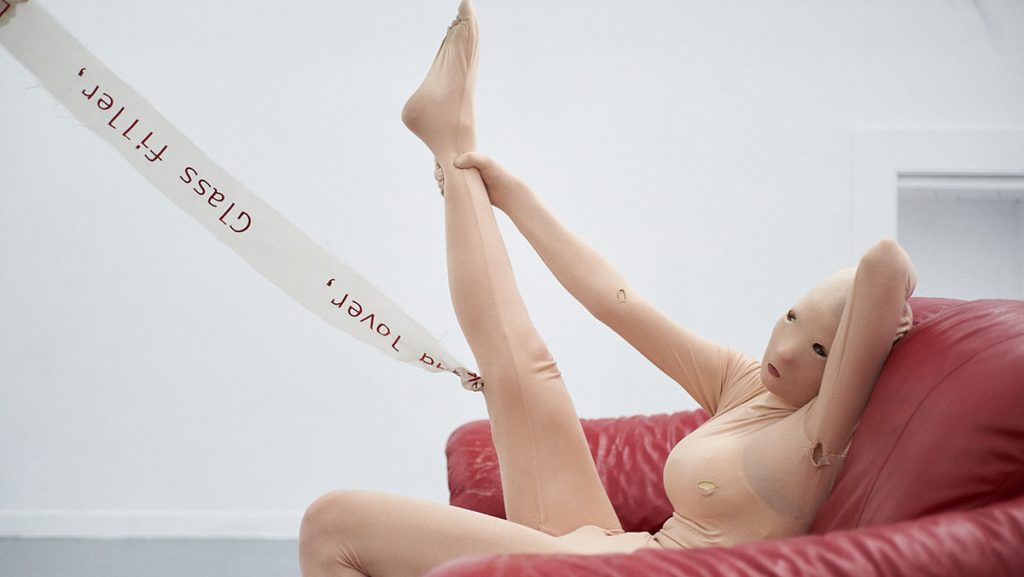 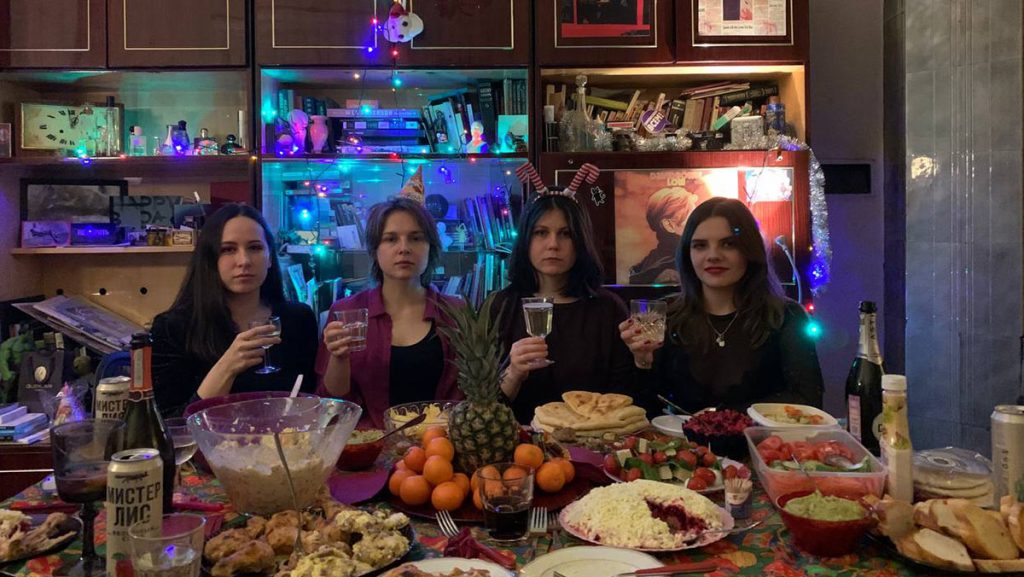