“Nobody is born and nobody dies” – writes Mickiewicz when he is fashioning his Konrad as an androgynous ex nemino nemo, but also not without significance – as a man who struggles to the same extent with his own identity as with the myth of romantic love. Nobody exists, and yet s/he talks.

II. Lusus de Nemine is a game with Nobody or a game of Nobody. It is a rhetorical trick and a subversive storytelling strategy by not responding. Someone is there, but it is as if there was nobody. Nobody is the essential gap, a tear that opens up a structure jam-packed with inklings and imaginations, allowing you to peek inside the box – or a horrendous can of worms, stuffed in equal measure with the suppressed and the unimaginable. Bam! Nobody knows anything. We are all guessing.

III. Saint Nobody, the hero created by Radulphus in the thirteenth century, is a pronoun that transmutes into a subject. In Latin, as in English, the term “nemo” (“nobody”) does not require double negation. Nobody is. There is no gender, age, or race ascribed. In the Bible, ze is the only one who opens what others close. Ze goes where no one can enter and sees what even god and gods cannot see. Nobody is everywhere, and ze can do things that… well, nobody can do. Ze breaks up norms and orders. Paradigms, conventions, and discourses. Ze is weird and amazing, queer and ridiculous. Nobody is not looking for a metaphysical thrill, ze is that thrill. Ze is an ambiguous “to be and not to be”, marked by a schizophrenic perception, perverse as if nothing had happened.

IV. In the beginning, there was sex – Arthur Schopenhauer supposedly wrote. Supposedly, because in the Polish translation Przybyszewski renders the German word Geslechtliebe as lust. “In the beginning there was lust. Nothing but lust, and everything in lust”. For Gombrowicz – a writer embedded in the strategy of ambivalence, and erased from the reading canon because of its homosexuality, among other reasons – the embodiment of lust is the back of the lower leg: the calf. Seen in the Tatra Mountains, the young and fresh calfness will transform into two choruses, and their singing, under the baton of Gombrowicz, will burst within one beauty. “Łydką, łydką, łydką; Łydkom, Łydkom, Łydkom; O łydkach; Łydce, łydce i łydce” – calf and calves in all possible inflections. In “Ferdydurke”, the same calf is merely a mask and a fetish, a cynical extract from a revelation whose fullness is immaturity. For the explosion to occur, says Gombrowicz, it is necessary to give the whole thing a good shake.

V. In “No-body and Some-body”, the Jacobean play, central ambiguity is that when No-body is in power, nobody is reigning on the throne. In Achim von Arnim’s version, nomen omen, no one asks for power anymore, but everyone wonders why the world is so poorly arranged – like a bourgeois apartment for rent. We can be sure that if silver spoons go missing in this flat, Everybody will blame Nobody. “Who stole the spoons? Nobody – swears Everybody in order to deflect attention from themselves.” Perhaps this metaphysical burlesque springs from the fact that the spoons never in fact went missing? Or maybe they were never there at all?

VI. In his “Kronos”, Gombrowicz notes that, except for his early youth, he was never a homosexual, but at the same time, in the margins of that same journal – a monologue of the grotesque body – he uses circles to mark sex acts and scribble the names of his young lovers. “A man who, being a man, does not want to be a man, but is chasing men”, he writes in “Trans-Atlantyk”, where not only is he torn between fatherland and sonland, between disgust and fascination, but he also smuggles in the queer and potentially dangerous storyline of Gonzalo, ready to explode at any given moment. And no, he is not writing about himself, but perhaps he is writing about someone who – rather like his protagonist – does not exist? In the mid-1980s, when Albert Fischerman filmed “Gombrowicz, or Seduction” [Gombrowicz o la seducción], a film in which the writer’s old friends play themselves, the conjured ghost turns out to be a bundle of traumas, anxieties, and desires, and the movie itself is yet another Venetian mirror. A voice that lends its voice to other Others.

Nobody is an anarchist dandyism and a grotesque monologue, studded with footnotes, with densely annotated margins; it is a story about encrypted and encoded secrets, about silent mythology and invigorating heresy that tears the body apart and floods everything with destructive lava, about forgotten desire, and lust atomised like forcemeat in a pâté. It is about queering the canon, about pastiche and self-irony, or a carnival, which Goethe described not as a feast put on for the people, but a feast put on by the people for themselves; and above all it is about a method that may or may not be related to the story of Nobody, even if – or perhaps even more so because – it intertwines with Everyone’s story. “May Everyone go see for themselves.” This is how one of the folk legends ends. In the Middle Ages, people believed that somewhere, three miles beyond the world, you could find Cokaygne – the land of roasted pigeons. It is a place where no one goes hungry; where everyone is equal. They are all themselves, and no one hides their calf under their skirt.

Nobody, Never, Nothing. Amen*

Active Citizens Fund – National is funded by Iceland, Liechtenstein and Norway through the EEA Grants. 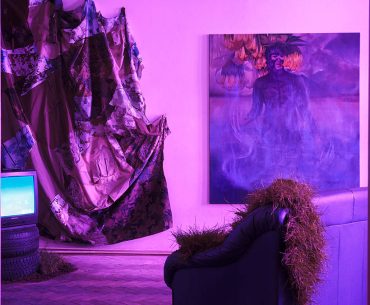 In an Ancient Greek comedy by Aristophanes, clouds are something more than mere decoration or staffage, more than the matter out of which impressive landscapes are moulded, as of clay.