In the course of the lockdowns, the layered presence of timelines and the duality and disparity that has affected our everyday perception and image of the world since the alleviations have been experienced to varying degrees, but by all. The exhibition Remnants to Remain oscillates between real and constructed spaces, between layers of past and future. Some of the exhibited works explore everyday moments and personal experiences through emotional qualities and memories linked to material motifs.

Objects act as mediators between different ages and persons, thus the associations and emotions associated with them can be recalled and evoked by the individual at any time. One of the best-known examples of autobiographical memory is the point in Marcel Proust’s novel In Search of Lost Time when the taste of the famous French pastry Madeleine brings back childhood memories. Interestingly, scent-induced memories date back to early childhood, mainly before the age of 10, and are recalled much more intensely than memories evoked by photos and texts. The process of involuntary memory can be controlled by the careful selection of the objects around us. The value of an object in financial terms, or as determined by a given society, is secondary to its impact mechanism on memory. Because of its complexity, the theme is also explored in a broader context through the individual works. From constructed reality through the everyday phenomena of déjà vu and nostalgia to Bergson’s concept of time (‘creative time’), countless layers are linked to memory and perception. The current relevance of the exhibition, which was delayed for almost a year and a half due to the virus, is heightened by the collective experience of the pandemic, to which the exhibited works indirectly reflect through the registers of memory in the system of the individual-space-time relationship. In the course of the quarantine, which has rapidly become the default position, the thesis that constancy is only an appearance and that change is the only invariant factor, has been completely overruled at the level of perception. Despite the constant flow of information and fluctuations, Remains to Remain aims to define a “fixed” point in the present and make it accessible to all.

The brain is processing parallel times. In this way, we can also interpret phenomena in which the flow of time is perceived backwards. (Detlef Linke: “The Brain”)

Writing by Gergely Nagy. We have adapted amazingly to the situation. We stocked up on yeast, ordered food and household items online, put on masks, took hand sanitiser with us, but of course, we didn’t really go anywhere. We have boosted online yoga classes, Netflix, bread-baking tutorial videos, our room plants have never been greener, we have removed contrails from the sky, we have silenced traffic, we have come to hear the birds, and we have shared reports of deer appearing in our cities. We coped, we squeezed out what we had, we survived, and we got through. Of course, not everyone could do it. But here, in this country, we have tried to focus on those who have survived. Those who still have a job, a home, a family, or at least a room plant. The victims then have no names and no faces, no relatives and no acquaintances, they only have silence. Just a row of pebbles, let’s say: an alternative memorial to them along the Margaret Island running track. Thirty thousand pebbles and counting. We are alive, and that is the bottom line. Whether we like it or not, we will return to normality, but nobody can say at this moment what normality is.

We accept as normality anything: the so-called emergency, the armed patrols on the street, the curfew at eight o’clock zero to zero, the non-payment of benefits, the peculiarly distorted domestic version of Kurzarbeit, the Chinese and the Russian, the operational staff, the outsourcing of foundations, free parking that has overcome the virus; it simply circled around in its car until it was exhausted because it couldn’t park it anywhere… But of course: did we really have a choice? We had to accept as reality the limited and controlled context into which we were suddenly thrust and where we immediately lost the right to control ourselves. There was little left to do but look inwards and search inwards for areas where we could set foot. After all, what happened here? What was all this? Explanations were immediately forthcoming. A year torn out of time, a forced pause that should teach us something. A last warning from nature that if it goes on like this (i.e. like before), our world will end. Lockdown, which could also be described as slow down. We had to learn to slow down, deal with things according to their value and place, and look inwards. Nature has fought back: we have ripped too much out of it, we have inflicted too many wounds, and now it has unleashed something on us that has proved fatal.

Cyclical repetition, plague, Spanish flu, bird flu. What is the problem? It has been all the same, just hit a bit bigger in this globalised world. My grandfather caught the Spanish flu when he was eighteen. He recovered, but he paid with half of his lung, and from then on, he could only breathe with the other half. This, in turn, helped him avoid the military draft in World War II. Did the Spanish flu save you from the Russian front? It can be understood that way. What has this one year saved us from? Most of the works on show here attempt to take stock, collect and reorganise what is left in our personal spheres, in our minds. The idea of the exhibition is that in the confinement of the past year, the present has ceased to exist, that is, we have lost contact with the present, that we can only ponder the past and a possible future, as we have lost the present, the here and the now, and suddenly there is no one, in fact, no one on planet Earth who knows exactly what is happening, what should be done and what might happen next. Our perceptions have changed, the information from the world has come in ever smaller and more filtered doses. If I see my room in the morning, at noon and night, if I cannot live outwards but only inwards, I inevitably start to shift my focus. Inner freedom, is that what we are talking about? Perhaps. A different kind of synchronicity that puts me in tune with things and myself in a different way. A new identity is formed in quarantine, or if not a completely new one, and I am forced to revise the current one and create some kind of balance. The personality is inevitably trying to find some kind of meaning in everything that happens to it, searches for and create a narrative, and we try to fit the event into a story. It is not possible for events to be unconnected.

The task of art – if it has any task at all – in this situation could perhaps be to gather all that can be built from, from which we can start anew, to move, if not to put back, the time that has been pushed out of place and bring it somewhere where we can start something with it again. To at least get in sync with it and create the basis for some kind of narrative again. The curatorial introduction to this exhibition refers to the German brain researcher Detlef B. Linke. In one of his interviews, we read: “The brain bridge between the two cerebral hemispheres has about two million fibres, and there are billions of neurons in each hemisphere – so it is clear that the brain bridge is not sufficient for the smooth flow of information between the two hemispheres. No wonder, then, that this can lead to conflicts. I think it is part of normal human destiny. Each of us struggles with the problem of getting our two hemispheres of the brain to work properly together. But when this results in a partial shutdown of a part of the brain, it can be the basis for a high level of creativity” (translated by József Tillman). My assumption – either confirmed or refuted by the artists present here – is that art is a practice by which this alignment, this synchronicity, can be created. Synchronicity between reality and time, between time and the self, within the self, let’s say, between the cerebral hemispheres. It turns on certain functions and temporarily turns off others, unleashing the creativity you have been talking about. And we may need this if we are looking for what will help us survive what we have. Even if we cannot forget that there is still grief seeping through the walls. 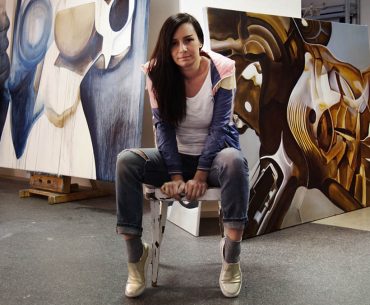 Hungarian artist Flóra Kőszeghy deals with the relationship between the virtual world and reality. She is an architect and artist at the same time. Her works are made unusual by complexity and contradictions. 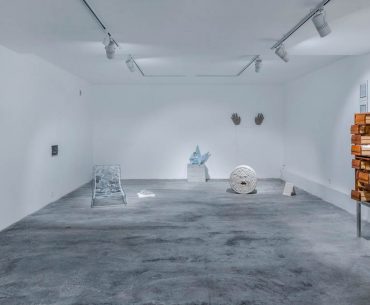 Exhibition. A Whale of a Bad Time

The topic of the exhibition evolves around the period of the late 80s, the 90s and the beginning of the 2000s, and its perception and memory of this era through artistic practices of the Y generation.