Major themes in her work include dreams, the subconscious and pop art. Her works are represented in various galleries and held in private collections all over the U.S. as well as internationally.

What inspires you?
I wish I could tell you exactly where my ideas come from but they come to me so fast that sometimes many of them die before they even reach the canvas – but the ones that do survive, dissolve and break down into tiny particles that some call “creativity” which creates a chain reaction that quickly sets a rapid-fire that I then have to balance/harmonize with the execution part of painting which luckily slows things down. I love that part of the process as it is very meditative, it allows me to paint in a sort of semi-trance and discover some things while in it. Another thing that I love is the dramatic/intense contrast of dichotomies/extreme opposites and the merging of the unexpected. For example the demonic and the pure, the grandiose and the simple, the rational and the irrational, the spiritual and the scientific. I love the tragedy it hides, the hybrids it creates, I see it as sort of a life symbiosis.

What should your artwork express?
I think everyone gets a different message from the meaning of my art, I do love it when it coincides with mine but I also get a kick when people come up with entirely different things than what I had in mind. Something I love about sharing my art out there is the connection I develop with people through what I create, what they see in it that resonates with something inside of them and inspires them. It makes me feel not so alone in this Universe and I get some sort of internal joy out of that.

How would you describe yourself?
Uff tough question. You know one of my favorite things Oscar Wilde ever said was that “to define is to limit”//same as describing. I can tell you that one of the only differences between a crazy person and I is that the crazy person does not know they’re crazy, I do and…I have been aware of being that from a very young age. I do see myself as someone who is constantly jumping between different states/mindsets of existence and what it means to live, and why. One day I am a total nihilistic person then the next I am an existentialist. Sometimes I see this as a battle, but sometimes I just accept it as two complimenting sides of the same coin. A sort of balance/complimenting harmony.

What do physics and art have in common?
Speaking of two sides of the same coin! Physics and art are exactly that, at least in my humble perception of it. To me they are like two sisters from the same mother who don’t get along well all the time but at the end could not live without the other. It is a beautiful thing to see one reflect in the other more than it is immediately obvious to a careless observer. Even though I spent 5 years in college to get my undergrad degree I can tell you that it was not after attending grad school to pursue a Master’s that I started fully appreciating and immersing into the vast vast ocean of Physics, the math behind can get very complicated very quickly but it is truly like the script of a symphony where Physics is that beautiful melody we hear playing all around us and within us. It is impossible for me not to feel deeply moved by the art in that, the composition of this reality that we exist/live in!

You are born in Venezuela. Are you familiar with the art scene there?
I left at a very young age (17) and as a teenager I was more interested in other types of art, most precisely literature. I had this goal that I wanted to read all of human kind’s masterpieces in both literature and philosophy so I would spend hours at my high school’s library reading every break and ordering entire books to be photocopied since we were not allowed to take most of these home. Luckily I developed a very friendly relationship with the librarian so she was ok with this, I think. Now as far as art goes I am however aware of two great masters in Venezuelan art history which includes two figures: Armando Reveron and Cruz Diez. Both led pretty interesting lives and their work is something every Venezuelan is proud of, including myself. Besides that, Venezuelan music, specially folk music is something I treasure immensely and keep in a special place in my heart. The incredibly powerful voice of singers/poets like Ali Primera and Simon Diaz. I get shivers down my spine each time I even think of their whole persona and their songs. It definitely shakes me to my very core, and I think a lot of people from my generation and the older generation feel the same.

Now as far as art goes I am however aware of two great masters in Venezuelan art history which includes two figures: Armando Reveron and Cruz Diez. Both led pretty interesting lives and their work is something every Venezuelan is proud of, including myself.

What do you know about Vienna? Have you ever been to Europe?
I have been to Europe many times but not to the mainstream countries like Italy, Spain or France but to some interesting (and always cold) places like Finland, Iceland and the UK. I love nature as I can feel the freest and connected there so those places were pretty great. For this very reason, I would definitely love to visit Austria in general as I have heard the hiking is pretty great there. Another thing is that I am actually a huge fan of classical music and Vienna of course has some world-class talent that I am dying to visit as well.

What plans do you have?
To suffer from love madness so that I can be in this utopic time bubble of endless inspiration and paint/create non-stop. Haha, just kidding (mostly). To be honest with you, and as people who know me know, I really dislike planning. I feel like planning weakens my ability to improvise which really affects my creativity. I love the excitement of sudden opportunities and the freedom that comes with it. So I will say I prefer directions rather than having a specific schedule. That being said I want to go in a deeper, more meaningful relationship with my art, I want to explore more surrealistic and spiritual themes but also more socially conscious subjects, given the times we live in. 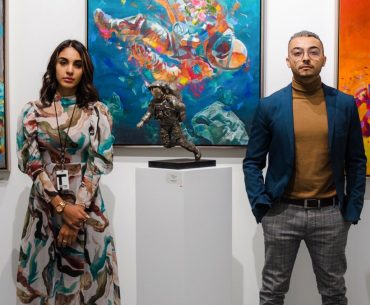 Jonlouis grew up in Melbourne, Florida watching rocket launches as a child fueled with curiosity. In 2014 Jonlouis began his professional art career and it was not long before he became a young renowned artist.