A stuttering, minimal splash of fragmented objects. Elisabeth Molin paints a multi-media picture of absence that makes you want to know more, drawing fragile cartoon bridges to artworks you encountered long ago with a set of story triggers that have no visible punch line. The charming surface of a deep, inky well.
Text: Sam Bunn - Photos: Luigi Lamar
12. Juli 2021
Share
Share on Facebook Share on Twitter Pinterest Email

I was expecting a bunch of textual audio fragments, (because that’s what the text told me) which actually I got. But I didn’t start to receive them straight away, because the individual elements of the exhibition were too busy telling me stuff. And that wasn’t even everything.

It started with a big rollered splash of yellow, shouting at me through the front door as I approached the space. Boomph. Molin had applied bright yellow paint with a small roller in a way that left a perfect white edge around the yellow when viewed framed through the doorway. It stopped just where it wanted to, roller strokes visible, as if someone was testing out how that wall would look all yellow. A fragment. A touch. A splash.

As I entered, the next thing to present itself was a pair of neat, polished black shoes. Positioned precisely together, a polite distance from the wall. As if the wearer had placed them there and slipped off for a swim in the yellow. Or as if they were patiently waiting there for something. Except that they weren’t there, just the neat, black shoes. A placer for a person.

Now inside the room, a sweep of the eyes revealed various areas of interest, all of which needed to be investigated in turn: a light bulb, still on, with its black bulb broken (How? – I realise now – is that possible? Where’s the noble gas kept?); a little object placed on the space’s electricity casing, not sure what yet; a series of black images, a large black monitor with images rolling; sound, playing from not quite sure where, but somewhere other than the monitor, coming from behind the curtains?; a larger, framed image on the far wall.

First I went to have a look at the unclear little object on the white casing. It was a cigarette butt, stubbed out. Except that it was made of glazed clay, meticulously. Another marker for someone missing?

The broken shards of the black light bulb fascinated me for a while – opaque fragments lying scattered around their mysteriously still glowing light. A literal description of all the other pieces, fragmented parts of thing. And then I drew back to the shoes. There was something funny about them…something about them wasn’t right. It was their insides. They were too black. It was as if they were filled with oil.

Indeed, it was that they were filled with oil. Calling up hazy memories of that giant room, 20:50, first filled with oil by Richard Wilson in 1991, hand in hand with Mr Saatchi. A memory marker for the Britart I grew up on in the early ‘noughties’. Of course then there was Sarah Lucas, smoking her cigarettes sitting on the toilet, stubbed out but memorialised. A trace leading toward Ryan Gander, that player of games evoked through the disparate multi-media harmony of the whole, though here each of these pieces less grandiose. It was as if I was standing in a ‘How To of Where the Britartists went Wrong‘ with their grand gestures. Amid something more, and less coherent.

I found another stubbed out ceramic cigarette stub around the corner, smoked down and frozen. And by it, a pair of smoking white wellies set inside of a niche, framed by another blast of yellow. This one, photoshop-gradiented to black and wallpapered into place. As if the white witch had just been zapped to a digital elsewhere by some mysterious force. The abstract sculptures of Haroon Mirza came to mind here, his mastery of ultrasound and all things arduino packed neatly into her under wall kunst niche. (I later learned that the wallpaper was no photoshop. It was a close up of skin, that somehow went yellow and faded to black when photographed.

Lying alone on another ledge, a black leather glove, knuckles bulging, knuckle-duster-like, teased me with its simplicity. If unprompted, I would have looked and nothing more. That would have been my mistake, for I had already learned that nothing was as it seemed. The text would have told me, if I had looked. Physically prompted, I prodded. The whole ‘glove’ was made of metal, dressed up to look like leather. A hard symbol of a soft thing. Daniel Clowes’ Like a Velvet Glove Cast in Iron springs to mind here, even though the object was aping leather not velvet. A stray reference perhaps, not quite fitting. But then again: Indie stories of isolation, love and confusion loose and lost upon this mad modern world of ours? It might well fit.

We joked that such a glove would be perfect for winning duels before they even started. One slap in the face with THAT and you’d be reaching for painkillers at dawn. Though there’s no-one here to duel with – they’re all off somewhere. And the end of each tale is missing its punch line.

Proving my point, behind this weighty, handy set-up line, the framed photograph hanging isolated on the wall, side and centre, shows a suit jacket hung upon a fold-up chair. Its owner off somewhere too.

And so to the black pictures. Each made so that you can only see the grey text printed upon each one as you stand directly before it – viewed from the side they fade to black. Some clever making trick that I don’t fully understand. Filtered glass, perhaps? The juddering stanzas almost formed a sentence from left to right: last month – since the – could end at – from the day before – over night, but the meaning remained far from lucid. Despite appearing most like an isolated artwork in this room of blurred edges, they fit right in. Their hard edges masking a soft, fluid centre. A never ending ending.

Swimming in this fog I sat down to watch the video. I couldn’t really take it in. A person – a woman?, disappears into the trees in a white hazmat suit. A camera melts, burning. A robotic bug waddles around. Phrases of text rise up and sink away. I remember nothing. 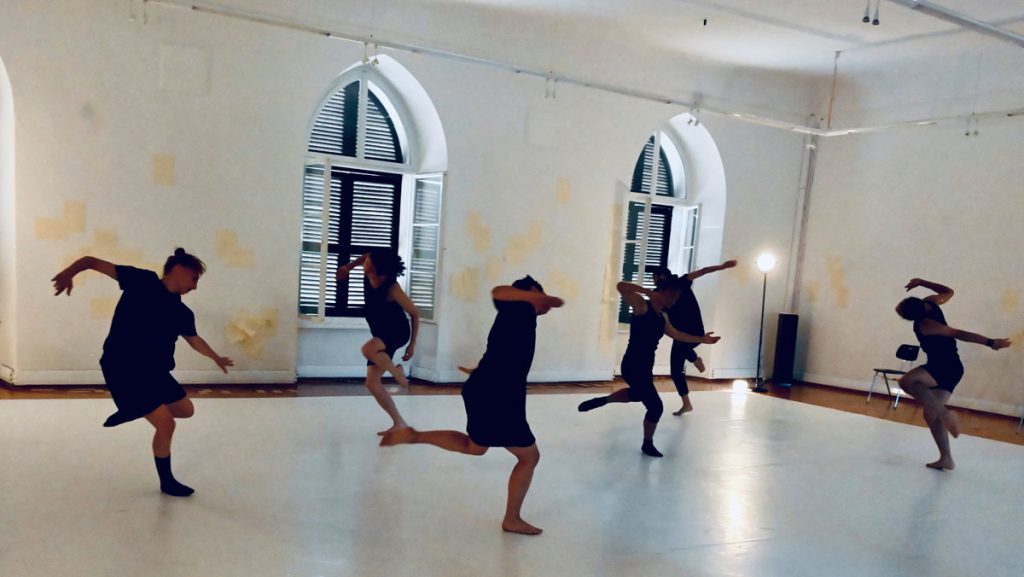 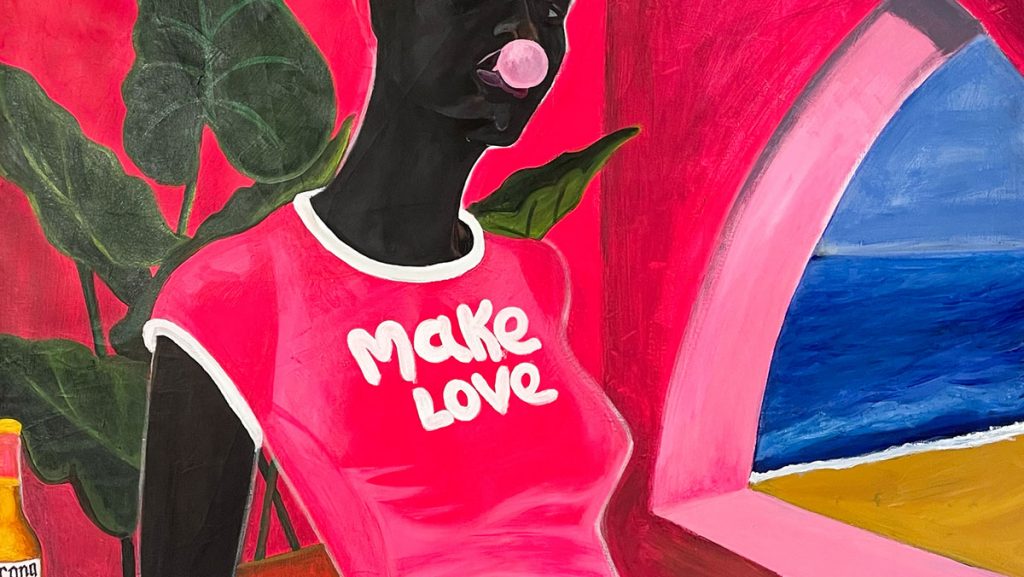 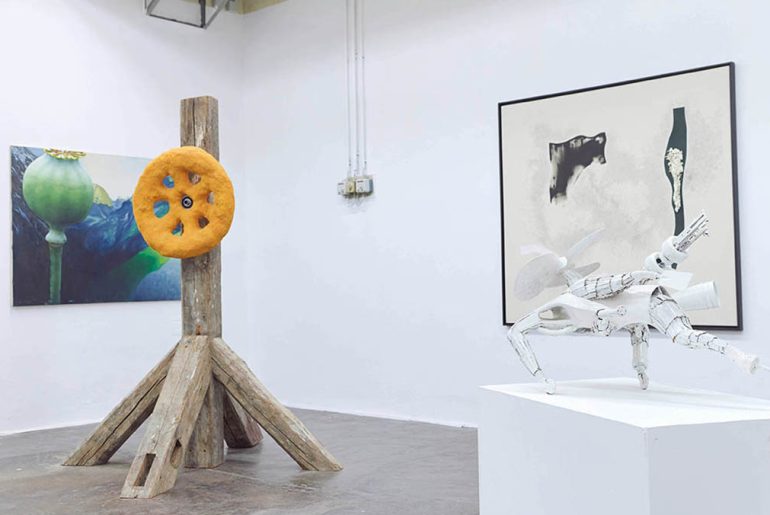