MYTH gallery. Till next time Piter

From the windows of the gallery one can see famous canteen „Kolobok“, a popular meeting place during the Soviet Times. The building where the gallery is located, holds inside many stories. It was build from the famous architect Boris Girschovic, on an Art Nouveaux Style. In 1901 the building was in the ownership of an only single merchant. Than in Soviet Times, it was turned to communal flats. In contemporary times, founders Julia Vyatkina and Olga Profatilo picked the space and started to make a major renovation (for interesting informations of what was founded there, see their Instagram post – may 28). The main building door is shared between gallery visitors and neighbors (they do come often in openings). I got to know MYTH Gallery in Vienna Contemporary, in an edition when due to Covid Restrictions, foreign galleries were just a few. Get to know them in their booth D5 and at their home in St. Petersburg.

On Friday 25th, time slot 16 -19, I visited Vienna Contemporary Art Fair. It is a rainy day, a grey one. I do fast steps on the Messegelände and take a shot of caffeine before entering to Marx Halle. It is enjoyable to see from a corner table of the bakery people that are going towards the Fair, for their „yearly class reunion“. The first thing that strikes me, when entering the hall is how quite it is in comparison to previews fairs. This year local galleries are dominating. Or to better say: It was impossible to organize as usual a truly international art fair. Nevertheless, some galleries from abroad still managed to showcase their works.

During the first hour, I visit the exhibitors that I know. Than I give a quick look to different booths by using the movable art work „Buggy, 2020“ by Paul Horn, represented by Knoll Gallery. Maybe some of you have tried it as well (It is impressive and offers you an opportunity to reflect). Than after getting sensations of the atmosphere, architecture, I started visiting galleries that were coming from other countries. For whatever reason, I am drown to the booth of kajetan gallery (Berlin) and the one of MYTH Gallery (St. Petersburg). In particular, MYTH caught my attention (due to some special relationship that I have with St.Petersburg. I have spent in 2014 a whole winter there with my sister and our Golden Retriever). Hearing Russian again, reading Cyrillic lines made my memories reappear. The way how the booth is curated gives a narrative flow. It looks either is a very well curated one, or if you are too concentrated you feel like you were attending three solo shows. MYTH was showing works of Liza Bobkova, Anna Afonina and Alina Glazoun (Some Cyrrilic: Анна Афонина, Лиза Бобкова, Алина Глазун), three artists that they are representing since more than a year.

On the left side there are the works of Liza Bobkova, very small formats. 15 paper, watercolor, ink works. All 30 x 30. They have titles, that you emerge on them, that make you think. I hate those who give up their dream -and fuck the arguments. Bingo. You’re nobody here. There’s professional sadness in the backseat. Just 275 times.

I hate those who give up their dreams- and fuck the arguments. Bingo. You’re nobody here. There’s professional sadness in the backseat. Just 275 times.

Next to them, there is a black and white series with 21 pieces of 20 x 16 x 0.5cm porcelain tiles, called biscuit. In the middle are displayed the works of Anna Afonina. Large formats works, fragments that have been picked from her past and her childhood, from vacations or from dreams. Now they look like memory of a memory. She uses oil on canvas, but it doesn’t stop with that. Than adds to her paintings small moments of felt-tip-pens and fluorescent markers (only she maybe knows a why) and on corners of paintings some textiles are attached. To know more about her art and her thematic, one could read her biography on the MYTH Website or the curated text of her current exhibition in St Petersburg. On the right side (based on where I am positioned) are shown the works of Alina Glazoun. They remind one of Home Blessing Plates. These plates do not have blessing from the ones we are used to see. Glazoun uses this aesthetic for writing unconventional lines such as: Magic Position, Mesmerize and Angst.

Magic Position, Mesmerize and Angst.
I want to know more about them, more than I am able to see on this booth. In order to be able to describe it, I have to get to know. Having lived once in St Petersburg helps me to imagine those roads where I have been walking, but since than many things have changed. Svetlana helps me to see the space, we exchange long and short emails, WhatsApp messages with video, photos and sounds. I asked her to document for me the sound of the area around and inside of the gallery, but also the one of the staircase and the dialing numbers of their intercom.

My Young True Heroe as we represent young artists, and also myth is a very important part of our work – artists and curators are always reflecting and make references to different myths and create them as well – Svetlana Sidorova explains what MYTH stands for.

Since then, these artists are still working with the gallery. Part of the gallery roster now are: Anna Afonina, Liza Bobkova, Nikita Seleznev, Vadim Mikhailov, Alexander Sedelnikov, Alina Glazoun, Genda Fluid and Alexandra Paperno. Through scrolling on their bio-s, I got to learn a lot of Russian art academies, such as Tolyatti Art Academy, State University of Film and Television St. Petersburg, Rodchenko School of Photography and Multimedia in Moscow. Than scrolling brings you in other scrollings: scrolling through spaces and galleries that they have been showing. Names of spaces that remain on my mind and make me curious are Richter Hotel, Mars Art Center, Pink Pong, Elektozavod, Aperto Raum, Maxim Boxer Gallery, K35.

Till 15.10.2020, one can visit at the gallery the exhibition „I have already been here“, from Anna Afonina, which consists of a long series of Paintings, video and installations (made among others with dishes, organic, shower, metal, pvc)

Special thanks at Svetlana Sidorova (artist manager), MYTH Gallery and Cornelius Wildner for making the space and the location of the gallery from a simple WhatsApp recording into an imaginable, emerged space. 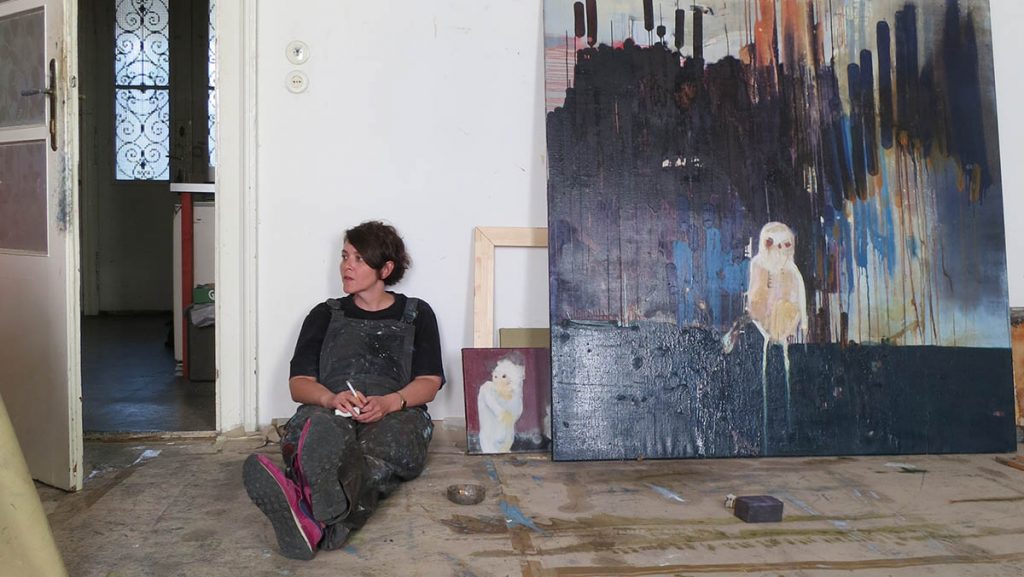 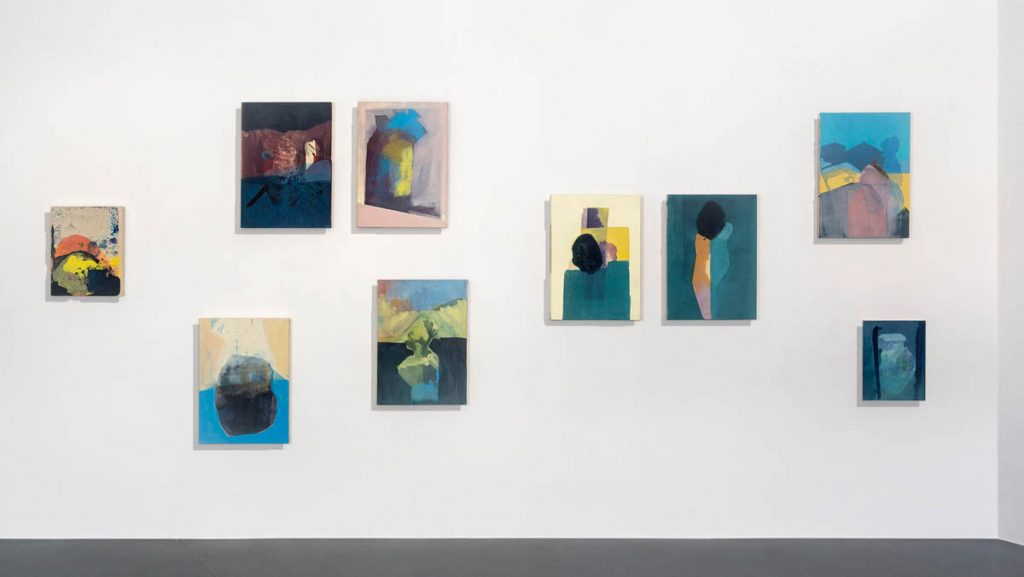 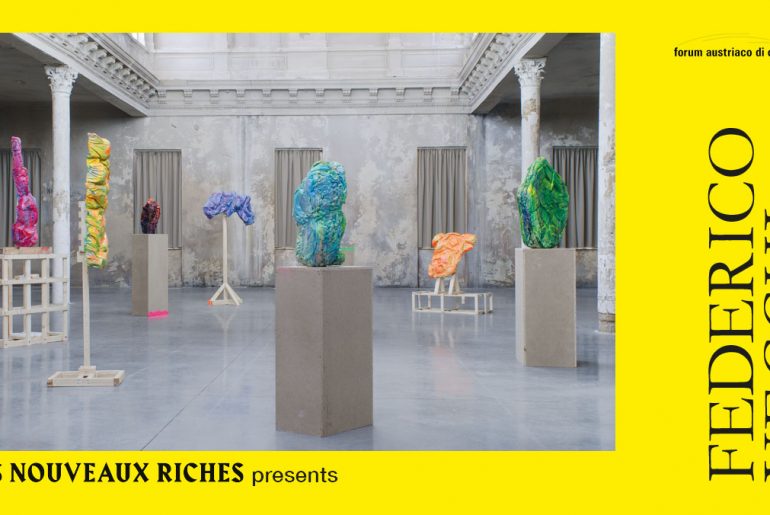 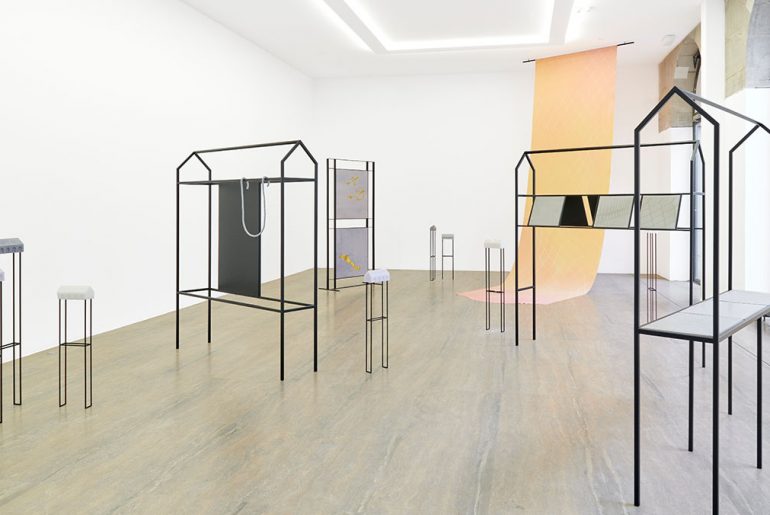 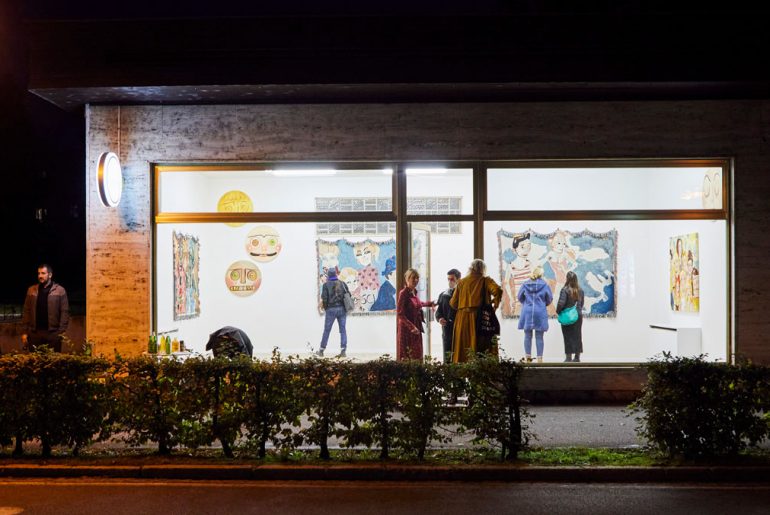