Beáta Hechtová, a Czech born artist currently based in Vienna, captures in her work the inner struggles that one experiences while trying to untangle the mass of information and cope with the increasing speed of the urban lifestyle.
Text & Photos: Olga Shapovalova
28. Dezember 2021
Share
Share on Facebook Share on Twitter Pinterest Email

Through painting, printmaking, collage, and installation, Beáta displays the restlessness of the subconscious and its chaotic connections to the process of creating our own position and “personal” opinion.

How and when did you get into art?
I have always used drawing as a tool to get through regular days. But I think the moment when I realised this is something I would want to pursue, was at a high school in the countryside of Maine, where I stayed for one year as an exchange student. I spent all my savings to fulfil the dream of travelling from a post-communist country to the glamorous USA – a country full of freedom, liberalism, and endless opportunities … or at least that’s how I imagined it. However, I ended up in the tiniest village in the middle of the woods. I had difficulties to deal with the strict rules and the religious environment, and resisted through drawings of caricatures and portraying absurd situations. Surprisingly the drawings started to have their own underground life. People began to pass them around, exchange them, add their supplements, and draw new ones with their own ideas. It was very interesting to watch, how this process created a dialogue, and then grew into a discussion with the school authorities.

Where do you find inspiration?
Stories of people, cultural melting pots, traditions, different religions, rituals, legends, myths, fairy tales, parades, animals, the internet, advertisements, the media, technology, the bright colours of pop culture…there are so many things floating around and all of them are inspiring to me. I like to catch the particles, play with their contexts, and explore the possible outcomes. Theatre has a strong impact on my work, mostly through the way of staging compositions. Sometimes it feels like creating a tragicomedy script according to the collected fragments, then choosing the actors, costumes, put on masks, set the sceneries and in the end arrange the lights. The meaning of the scene often depends on the angle where the light comes from, what colour it has, how bright it is or what it illuminates the most.

Where do you make your prints and what is your process?
From the printmaking techniques I mostly focus on silkscreen. The first step is to draw a sketch and decide about the distribution of colours. Since the interaction among the overlapping colours is the main challenge, I have to make a precise diagram. I usually work with, let’s say, six main colours of my choosing. Each main colour makes a separated drawing that becomes one layer – one screen. During the printing process, layering those six versions on top of each other produces the final print. When the layers overlap, new colours are created. That way, I usually generate around eleven colours in the final image. During my studies I was printing at the University of Applied Arts in Vienna. Since I finished, a year ago, I have used the printing studio of Kunst ab Hinterhof.

Tell me about your favorite medium.
It was never possible for me to choose a particular style or medium and stick to it for longer time periods. In an idealistic sense, chaos, overload, and strangeness were slowly becoming the main aspects of my work and that is also reflected in the mediums I was using. I ended up mixing it all together. Collage became the most suited and corresponding tool to my motives.

Do you use a sketchbook?
I don’t use a sketchbook in a classical sense. But before I start working on a new piece, I make a digital collage using the photos I have taken or downloaded from the internet. Sometimes, to get specific positions or expressions of people, I either go on a hunt to the streets and make a photo shooting with random strangers, or I ask friends to pose for me. This way my “sketchbook” is the ever-growing collection of photos, screen shots, downloads, cut outs or videos. I can spend hours just googling pictures of dressed up puppies, strange looking animals, meat-eating plants, Funny masks, rainbow cupcakes, unicorns, robots on Mars taking selfies, simply all kind of weird stuff this mad internet world can offer. Then a photo-editor takes the role of a pencil, as I modify the material, combine it, draw into it, and save it up for a potential further use.

In our annual calendar, your artwork represents June. What do you expect from June 2022?
The last two years of uncertainty trained me not to expect too much in advance. I’m pretty sure I will be again very pleased, as I was last summer, with my cellar studio in Vienna that offers a nice and cool environment for working, while outside the concrete is melting from the heat. Then, I assume, I will quite enjoy our new fridge loaded with cold bubbly soft drinks. Right now, I keep on hoping, that the projects which were postponed will finally happen at some point and that the culture scene will come back to its full vivid form.

What are you working on?
I’m now working on a series of painting-collages, where I’m exploring the use of fabrics and other materials, as a tool to connect the piece with the surroundings. I find it very exciting when the materials begin to distort the classical formats, emerge out from the “frame” and suggest the continuing direction. The ultimate goal of this approach is a fusion of painting, installation and sculpture. It reflects the infiltration of the digital world into our daily life and its prospective to ultimately change the human way of thinking.

The „This Time Tomorrow“ Calendar 2022 is now available in the LNR Shop. ⁠ 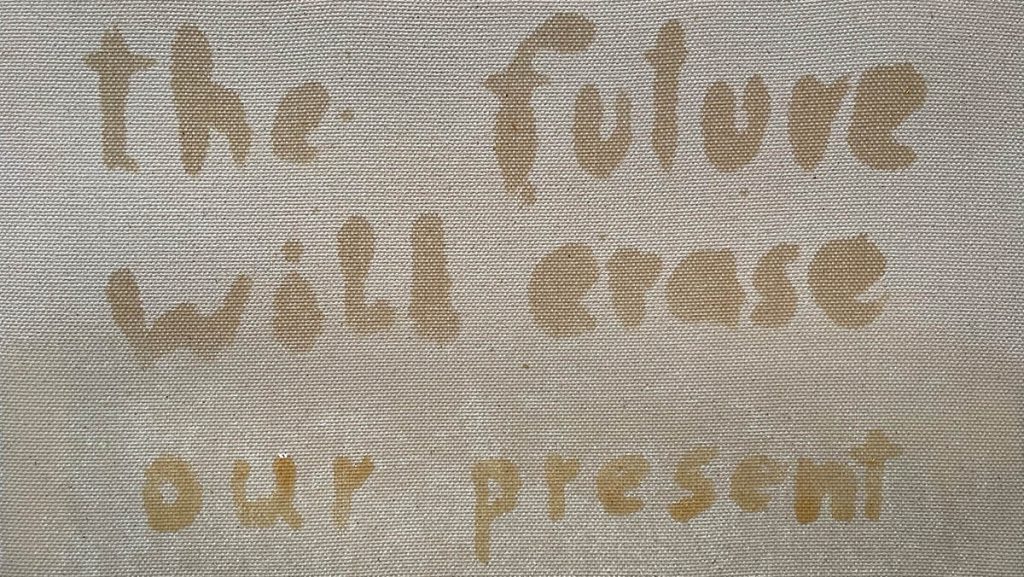 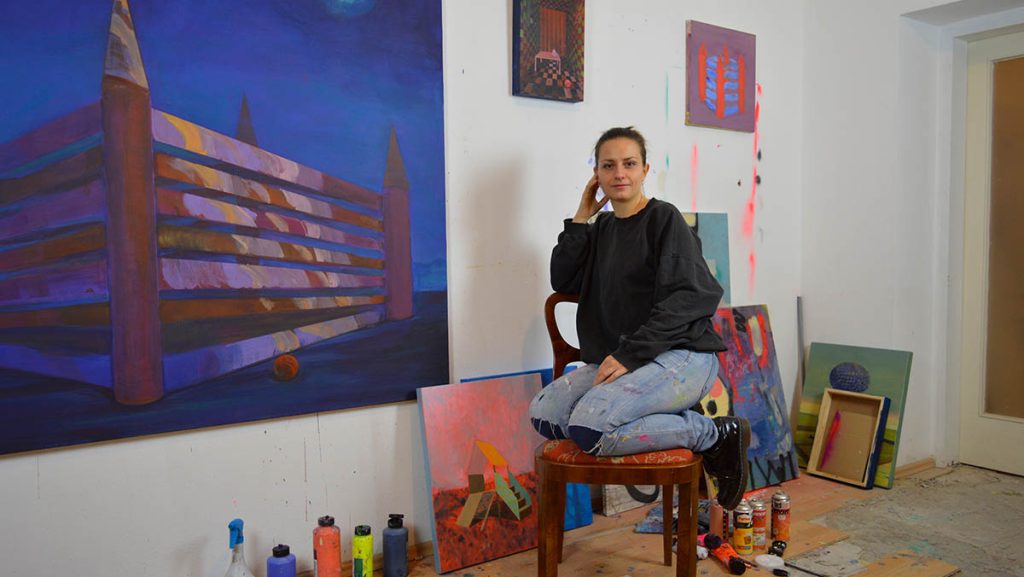 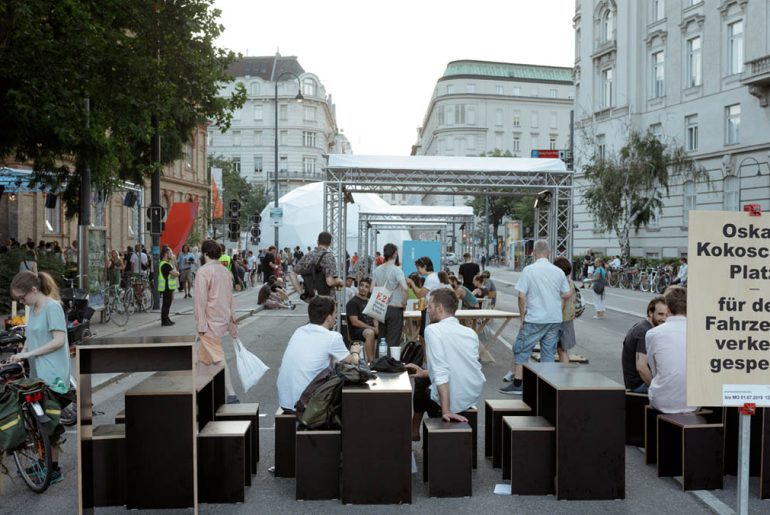 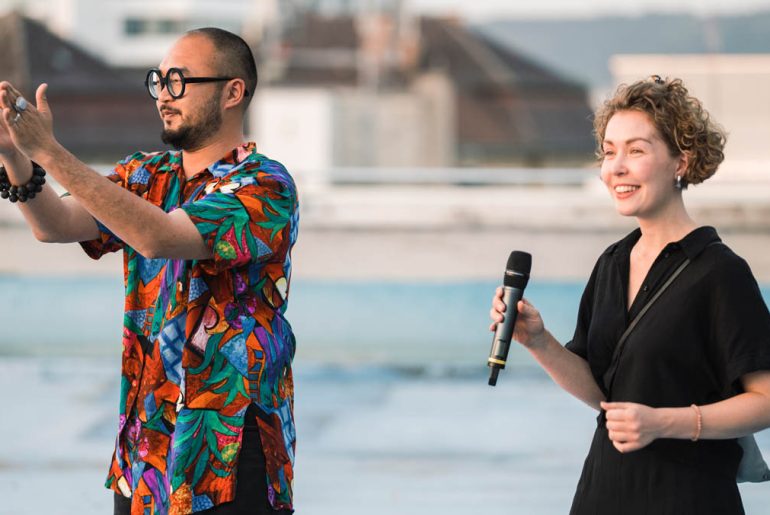 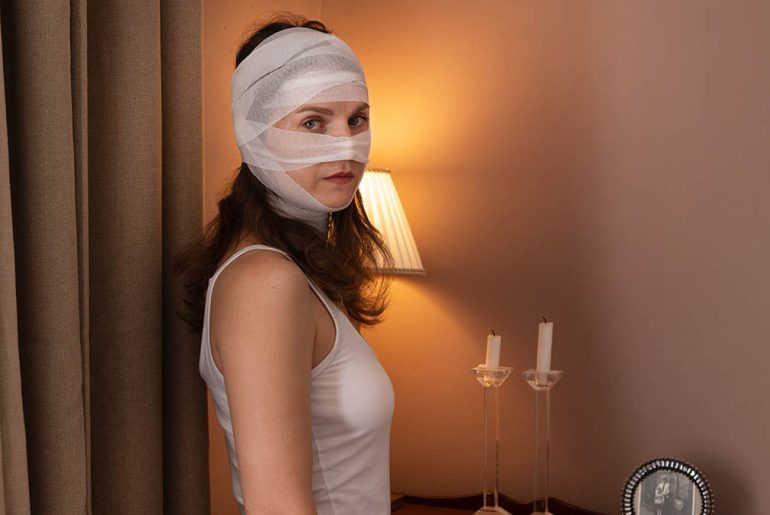