Sam Cherof’s work is evolution. His latest paintings are large-format, ungrounded canvasses in gesso-and-pigment technique. Focussing around the concept of approachability, these works highlight physical experience and a universal understanding. The artist’s path and comments up until now.
Interview: CHRISTINA-MARIE LÜMEN - PHOTOS: COURTESY OF THE ARTIST AND STALLMANN GALLERY
19. Oktober 2021
Share
Share on Facebook Share on Twitter Pinterest Email

From far away, the paintings very generally seem to consist of a monochrome, beige background and a simple element, such as a star or checkers board. Approaching one finds many stains and traces in most different colours, which are not necessarily identifiable within the painting. Where do these stains come from, any comments on your technique?
The works are done on raw canvas with gesso and oil paint. I made the paintings on the floor, so a lot of stuff comes into them and the canvas around the shape gets dirty. I use large tools such as rags or my hands, rubbing the surface to enable a direct transfer. I create layers over layers, resulting in rather complex colour schemes which evolve during the process. By taking off most of the paint, these indecisive and transparent structures unfold. Compared to earlier figurative works, the drips and dots in the new paintings feel more concentrated, in a way of being reduced to the essential. The earlier paintings are more concentrated in a sense of focusing, both with regard to process and motif.

Was there a specific reason for painting on the floor?
I wanted to make these big canvasses on the floor because it helped me not to think about the final thing too much. I’m plagued with perfectionism. Once the works are put on a wall, the reveal something and themselves.

How did you arrive at the Gesso-technique?
I was paralyzed with my work because I was so relying on always coming up with ideas, looking for perfect thing to paint. At a certain point I felt truly disinterested. I saw Joe Bradley’s paintings for the first time, his treatment of canvas and paint was so loose and free, and it just seemed fun. So, I decided to start painting on raw canvas. And I did, and the first works went horribly. The raw canvas absorbs all the paint, especially oil paint. I made some really bad paintings and at some point I ended up covering one work up with gesso into this one big shape. And I had this kind of flash where I could see a kind of painting that I had never seen. It felt really fresh, and I could see five more paintings that I wanted to make immediately. The first one was the star-painting and I figured out this technique of gessoing the area I would paint on. The shape I would come up with would be something very simple, but once painted in gesso it would lock in. And that’s interesting because once it locks in it stays and I have to deal with the shape I’ve created. That’s where my fussiness begins and the toiling on over how to make the image come alive.

What are your thoughts on the simplistic forms, fish, shoe, flower, star…?
I like simple things for a few different reasons: First, it is the stuff came to my head, things we see all the time. They feel accessible, universal, approachable. They may stand in for something else, but I don’t know yet what this is. And yet, their simplicity relates to directness of how I make them.

Was/is „space“ of any importance for the paintings/in your artistic practice?
Yes, space is certainly interesting. My paintings sometimes feel like an escape, especially now, with the new works breathing and pulsating from within. There is something meditative about them. The raw canvas constitutes a liminal in-between space opening up to the viewer. Both, my old and new paintings, are at the same time giving space and taking it away. In the earlier works, it was an artificial, more explorable space where the green bushes served as icons to mess up the illusion. The new paintings are happening materially. The image itself feels like it floods, a trompe l’oeil of form and space.

Compared to earlier works, these paintings come in large format? Were there any specific motives for expanding the method?
I became much more interested in the physical feeling of being in front of a painting. I was drawn to paintings like those of Jackson Pollock or Mark Rothko – so I had to scale up.

Would you describe Jackson Pollock or Mark Rothko generally as guiding figures in your practice?
Yes and no. A thing that might be significant about my works is that they are not the large confident paintings associated with Abstract Expressionism or a lot of the more contemporary naïve painting, where it is all about confidence. With my paintings, it’s about the humility of making it. I make this shape, and then over and over again I have to toil with it, rubbing the paint off, taking it off, until I feel like I have arrived at something. The concentration of this process creates the kind of energy within the shape I’ve made. Eventually it feels like a living thing.

And that is usually what I am looking for, but the humility within that is a more human thing: We tend to second-guess ourselves, we overthink, regret, try to make up for things. With my paintings, I am flipping that vein of confidence people claim to have all the time. I think people don’t make unconfident paintings.

I would say that in a way, a painting can never be completely unconfident. Because there is always the moment when you, as painter, decide that it is finished which is a direct affirmation.
I think my paintings are disguised in that they tend to vibrate this fear and strength. And this I interesting because the whole time while making it I am fussying around and all the sudden it will surprise you. And then I do feel confident about it.

Your work has been shifting between abstraction, large areas of paint, and more or less dominant detailed figuration. Where do you position your current paintings between the two, what are your driving forces at the moment?
I don’t like looking back to much, I can easily drop something I found interesting before. I’m trying to push what I am making right now. Some paintings are pushed more towards abstraction; but I push into different directions, to see what comes out. I can’t tell where the next paintings are going, I’m resetting at the moment.

In 2018, you made a series of paintings with large coloured areas and very tiny elements, such as circles, clouds or airplanes. The paintings to me seem a kind of exploration. Is that true, and if so, what were you exploring?
Back then I was interested in the craft of painting, the different phases it takes to create. I had a teacher, Ridley Howard, who made very clean paintings. I wanted to work like him and was much influenced by his approach. One idea that moved from there to the current paintings is that of creating an illusionary thing, which is then broken down.

There is some surreal element in it. Was this something you wanted to arrive at?
These paintings came about through small sculptures I was making at the time. At some point I thought it would be much more interesting to paint them. So, I played around with them, creating interesting spaces and painting them. Their surreal vein might come from this sense of playing, or the gap between the 2- and the 3-Dimensional.

You hold a BFA from the University of Georgia. Did you study painting or explore other media too?
My concentration was in sculpture. I did an open-ended programme, where I did less painting classes than usually required. I had a few mentors who were really helpful. In the last semester I started concentrating on painting. I was drawn to the rule of painting, the limitations it sets when you work with. In sculpture you could do absolutely anything, which was daunting. It felt like being in a supermarket where the abundance of choice makes it hard to take something. I loved the limitations of painting.

Would you call your education rather traditional or modern?
The teaching in sculpture was very conceptual. I really struggled to do this, I am much more interested in the process of making things – arriving, often and easily through mistakes. It never felt like I know what I was making. The conceptual approach in teaching always asked you to know beforehand what you were doing, while making it.

What’s your background? How did you come to study art?
The first person painting I ever saw painting was my grandma. She was a painter and art teacher, working in oil and later water colours. In her garage, she would give lessons to me and my cousins and show us little tricks such as … In school, art was the one thing I was excelling in. I generally have a bad attention span; making art could hold my attention and I would love the result. In High School I took making art more seriously attending a preparatory programme, where I would be at the studio all the time. After this I had the first studio at my house. I would make figurative abstractive paintings, I was really into Cy Twombly back then. In College, I stopped painting for three years and concentrated on photography instead. At some point I started taking classes and painting again, and realized how much I loved and had missed it.

In 2019, you held an artist residency in London, UK. By now you are living and working in New York, NY, US. Any comments on the different working atmospheres, art scenes … In how far did the move have effects on your painting?
Oh. Well, it’s hard to say because since I’ve been living in New York I work full-time. In London I was holding a residency, painting full-time. The energy in New York feels more competitive, people come to New York and suffer through the bad parts for the good – and you feel this energy behind. New York is expensive, thus harder. It’s tough, many people want to do something and it doesn’t work out, so people become cynical. In terms of painting, there is a lot of competitiveness around.

Do you have a favourite colour?
I like oranges and blues. And green. [laughs] I wish you asked me for my two favourite colours together: it would be natural colours or brown with something more hiky, like oranges, strong reds or blues. That’s where I am at the moment.

Sam’s exhibition Boot, checkers, fish, and other things is on view at Stallmann Berlin, until October 31, 2021. 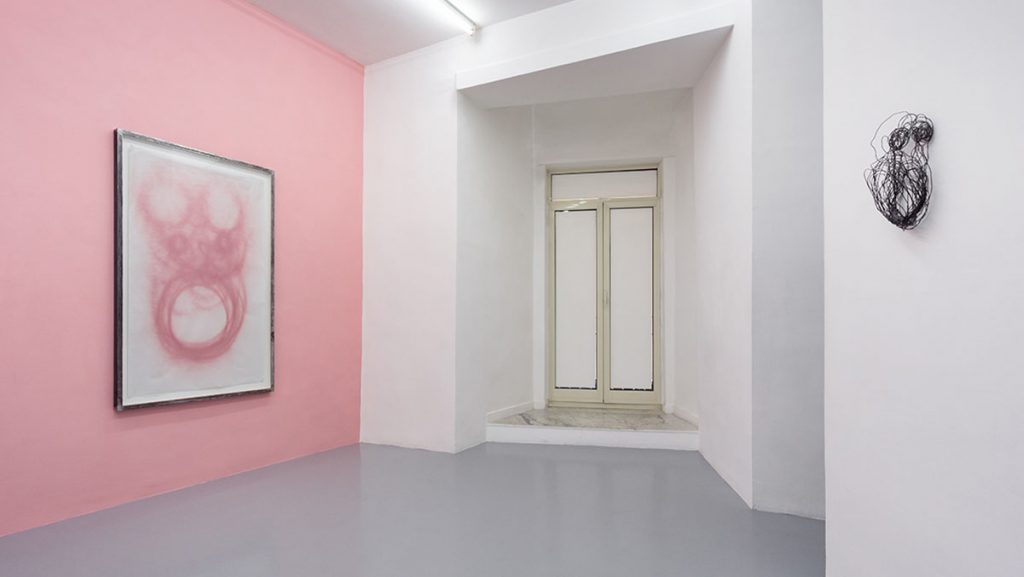 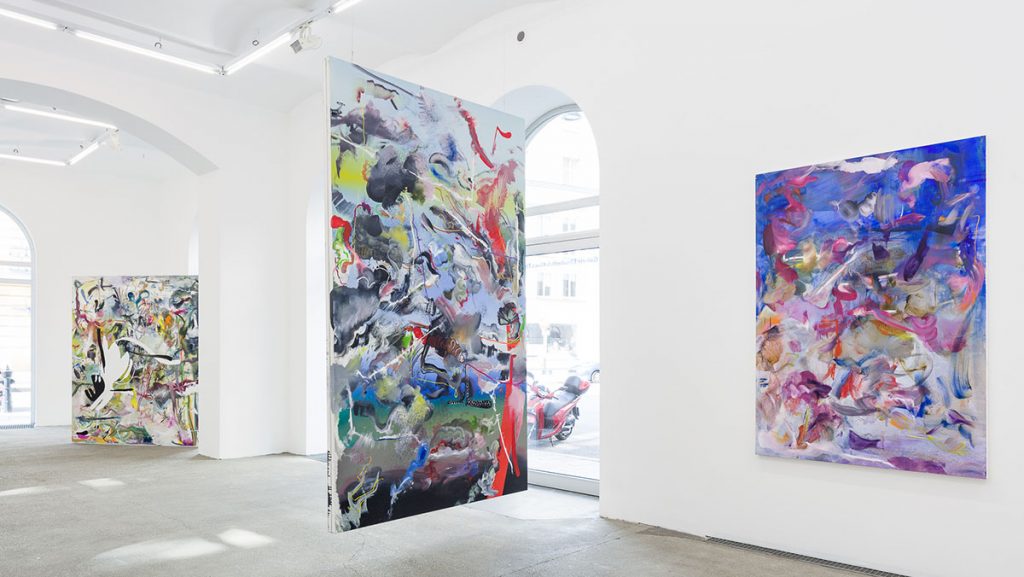