How did you grow up?
My family were peasants and I grew up in the middle of cultivated fields and fruit trees, placed in a large and sunny valley between mild hills, not far from Granollers, an industrial and commercial city. I could see people coming and going from the factories and others who cultivated the fields or collected the crops and with their carts carried them home. All that gave me a sense of rhythm, of order and a balanced relationship between urban life and nature that now has unfortunately broken up. I experimented the light and scent of every season in that mild Mediterranean landscape. Entering a boarding school was a student change and a sort of exile.

Did you always want to be an artist? How did you come into art?
Not until after I finished my degree in Philosophy at the University of Barcelona did I consider devoting my life to art. I started painting at a catholic seminary. Copies of Zurbaran, El Greco, Velázquez, Rembrandt. Later on I began drawing from nature: still-life, landscapes and portraits. This is how I discovered that to really know what you have in front of your eyes you have to draw it. Drawing is explaining to yourself and the others what you want to tell about what you see. You have to choose the essential, which, sometimes, may be hidden at first sight.

It was then that I finally thought that I had an inner world that I had to draw, not from the outer world but from inside. It is then that I decided, so as to say, to become an artist. I wanted to show a world of my own.

How do you describe work as an artist?
Working as an artist means being alone, the solitude of the studio, the dialogue with your inner self imagining what you want to represent and which are the means you have to carry it out successfully. It is a mixture of thinking and doing, of matter and thought. It may happen that you are carried away by an overwhelming impulse, but most of the time you have to work patiently, if not painfully, to give your work the kind of life you had imagined. If you go beyond it, then you have created a masterpiece! The poet thinks the world with his words. The painter thinks it through images. And the painter, like the poet, can never switch off.

What’s your artistic process like?
At first I felt myself like an explorer facing the forest. I experimented in different directions to find the path that would lead me to “the land of artistic wisdom”. I learned that I had to reject any option that didn ́t match my sensibility. As I said before I abandoned figurative painting to enter an abstract geometric world. There are three elements that I consider fundamental in painting that became the basis of my process as an artist. Colour, as the place where things happen and relate to each other. Line, which gives birth to forms, sometimes denying, sometimes reinforcing the colour that it inhabits. And matter, the pictorial matter that has to go accordingly with colour and form.

Finally, I went into constructing rather than expressing with brush strokes. And, as in any construction, void is of great importance. Such as it is silence in music. By the way, such a thing as “the land of artistic wisdom” does not exist.

How did culture influence your art?
Someone said that culture is what remains after everything has been forgotten. We are thrown into a world we have not chosen, in a place and a time in which we are to live without having been asked our opinion. It goes without saying that I will not paint as if I lived in a cave, or one century ago. All that we have heard, smelt, seen, felt, read, in one word, lived, is an aspect of our culture. And I paint from it. No more, no less.

What is important to you in life?
Justice, truth and respect. I think they are to be the basic values of any free society and the rest comes out of them. I also value having friends that help me grow, both as a person and an artist. I have been a member of a group of Catalan artists and writers, mainly poets, where all sort of subjects were discussed. Talking to other people helps to cast light on your ideas. Dialogue is the touchstone of philosophy. Ask Aristotle…

What are you working on currently?
As I said before, we belong to a place and a time. Here in Catalonia, after the Civil War, that ended(?) in 1939, a small group of people, writers and painters, summoned together to connect with the dominant trends of art abroad. Tàpies was one of them. The group was called „Dau al Set“, which in English could be translated as „Dice to Seven“. It was an ironic joke, for we know that a dice is a cube, therefore has only six faces. Around ten years ago, inspired by the name of the group, I started drawing cubes, freely breaking all the rules, those of perspective, number of faces, opacity and transparency. I only wanted them to be consistent. I have taken up again this subject and made a large number of small drawings that have become the departing point of the series of paintings that I am now developing. They include the elements of painting that are relevant to me: colour, line and construction, all playing with a geometric architectural shape. 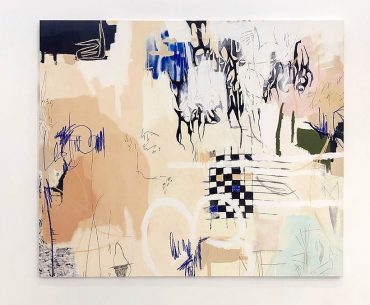 Sophie Crichton is a Barcelona based contemporary abstract painter originally from Toronto, Canada, where the allure of urban life began to fuel her artistic exploration and need.